Much to my dismay, we had to leave Kyle, veteran of 5 months and thus current holder of the long-termist title, behind in Ceará; he wasn’t quite done with Brazil. There was also talk of an expedition to Machu Picchu with Arne the cyclist. We can’t all be playboys, as my friend James G would say. Leaving the promised land proved very hard for other reasons, too. For it’s not just the Brazilian joie de vivre, their pleasant tropical hedonist culture, or this country’s delightful locals’ open and friendly manner.

Foreigners of the fair-skinned variety also benefit from a most peculiar type of what I like to call aesthetic racism. Even though I usually take great pleasure in reporting I’ve not watched any teleprompter apart from Pipi Longstockings under the careful supervision of my parentals, who would only permit this red-haired anarchist on screen, followed by my secret enjoyment of the late-night repeats of Baywatch during the pubescent years, I am at times inadvertently exposed to this primeval one-to-many medium. In Brazil, the average soap features a bizarre vision of aryans doing their rounds in s classes, inhabiting huge mansions, while the country’s predominantly black population features in the form of the occasional humble servant, the invariably female empregada. This has the straightforward effect of instilling self-hatred in the locals, convenient for the burgeoning beauty industry, as well as resulting in a perverse attraction to whitey. Good for us, the gringos and gringas. Because we all like a bit of attention don’t we. 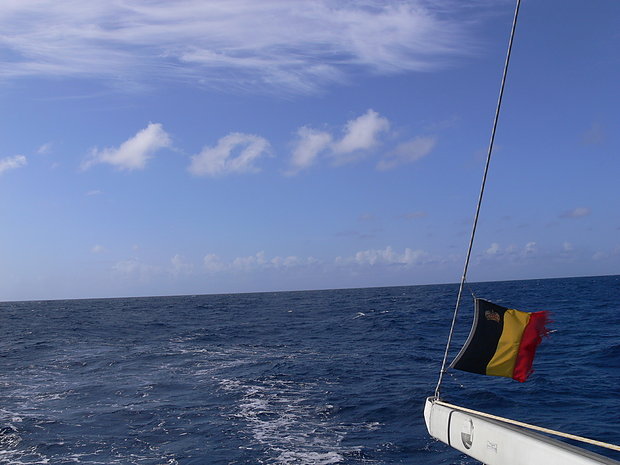 Either way, 5 weeks in this 5 star resort were exposing even our most modest champagne socialist ambitions to ridicule, and the time for a bit of expedition mode had come. I was joined by Dutchie Leentje, who comes from a bit of a boat gypsy background herself, and, shortly thereafter, by surfers Federico il professore and Leandro, both acquaintances of my friend Clélia’s. Leandro left to help single-handed Josean, we did some shopping and goodbyeing, and we were good to go. 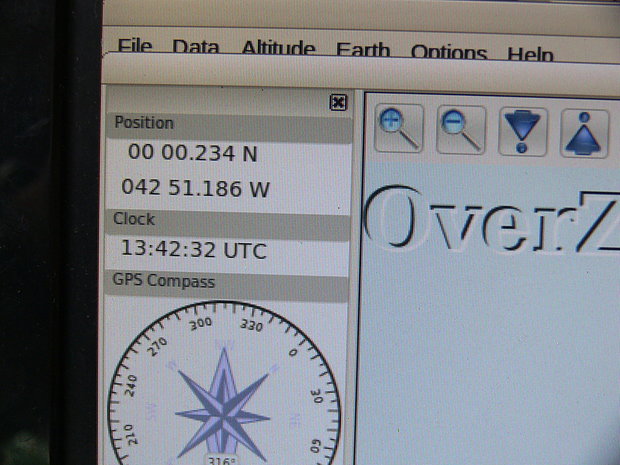 Unusually strong winds drove us straight up to the equator, and we celebrated our crossing with a quick cachaça com limão, para matar a saudade. I told my follow sailors all I knew about our next obstacle, the mostly windless intertropical convergence zone, aka the doldrums, and its main hazard: the dreaded tropical squall. This is basically where paradise, with your only enemies usually being sunburn and – oh horror! – shortage of cold beer, turns into a warm version of an autumn north sea cruise.

Neither Leentje nor Fede had heard the term or seen one before, something Neptune soon rectified: First, big squalls, later, lines of squalls, and then, after I had answered Fede’s question ‘is that a front?’ dismissively ‘this is the equator, there are no fronts’, entire fronts of squalls akin to a low pressure system appeared. With gale force gusts and torrential rain. Now I know what cruising guru Cornell meant when he wrote ‘the Itcz can be a surprisingly unpleasant place’. In the midst of one such weather phenomenon, I spotted some whales. Sadly only the standard breathing hole spume. Don’t be fooled: these surprisingly vain creatures only do breaching and tail fluke slaps during mating season, and only when a bbc camera is pointed at them. 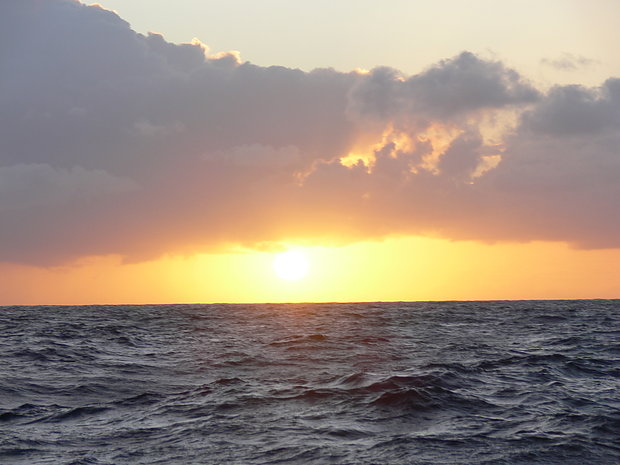 I next informed Leentje the worst thing for sailing is wind from the front, closely followed by wind right on the stern. She innocently asked ‘what about no wind?’, which turned out to be somewhat prophetic: We promptly ran out of wind. I do sometimes wonder what travellers on this ancient mode of global transportation did before one Rudolf Diesel came to our aid. In this case, instead of motoring or sitting around with slapping sails, I elected to just take the night off. I turned off all equipment and closed the hatches, setting boaty adrift in the equatorial current, 2 knots north-by-north-west. We spent most of our little break in the middle of nowhere talking shit about our craziest and loveliest former partners (you know who you are!), the stupidity of the human race, and our weird offshore dreams. 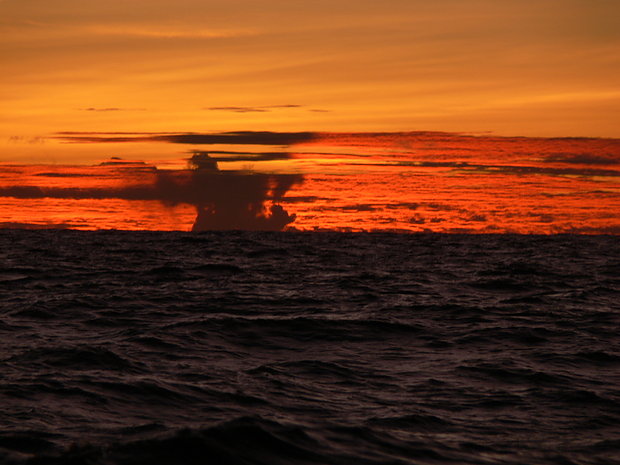 Yes, strange dreams of acquaintances from past lives seem standard when living in social isolation, and one morning brought a particularly strong memory back to life. I had spent weeks of a summer gone by exchanging glances with a particularly delightful creature. Her family was spending the summer on one of the sprawling campsites of the Dutch coast. Her name escapes me; for some reason they were all called Steffi or Chantal so it was probably either one of those. Yet when I finally found myself sitting next to her at the pool, which I used to gatecrash regularly, I found I had nothing to say to her, for our lives were too different. Her doll-like face haunted me for years. 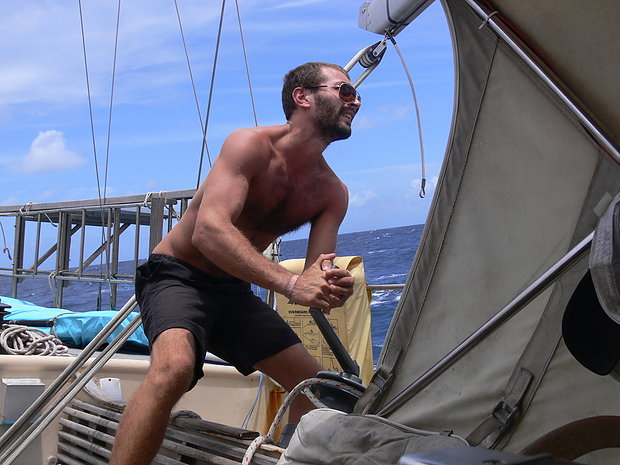 There were big shoals of young tuna around, jumping to impressive heights. We couldn’t quite decide if they were hunting or being hunted; either way, they certainly didn’t feel like biting on any of our trawling setup. We also spotted quite a few Portuguese man-of-wars, a fellow, albeit ultra-toxic downwind sailor of the ocean winds and currents. One night a big ship without nav lights passed with something that looked like an illuminated runway on top. The navy never turn on their running lights, I thought, it must be an aircraft carrier, probably from the US, most likely off on some brave mission massacring civilians from a safe height. The trip took place on a receding moon, which was also rising very late, around dawn. The resulting moonless nights offered spectacular stargazing and endless shooting stars. Fede professed to having run out of wishes. I also had two, which I sent silently on a just in case basis, much like I used to pray for a bicycle as a child just in case my atheist instincts were wrong. 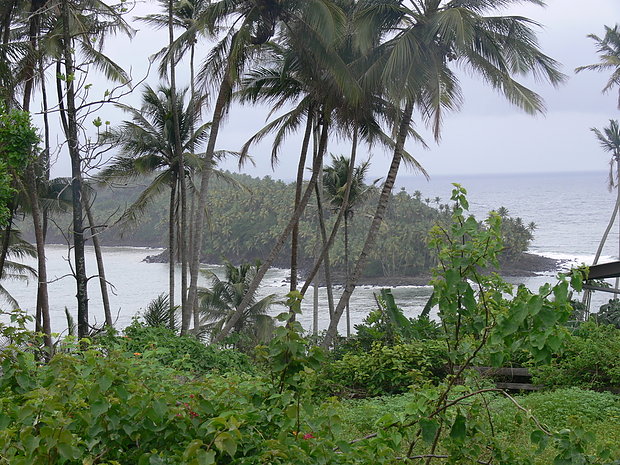 Before entering the river at Kouru, we anchored at Ile Royale for two days, one of the Iles du Salut, thus named by the monks who fled the pestilence on the mainland. Later on, the French had a penal facility here, setting of the famous (supposedly autobiographical) novel and film Papillon. Coming in from the oceanic desert, we were most pleased with the flora and fauna of the relatively untouched rainforest here. After ten days at sea, even a relatively plump French tourist looks like heaven incarnate. Or one’s first lager. Even if it’s a Heineken. 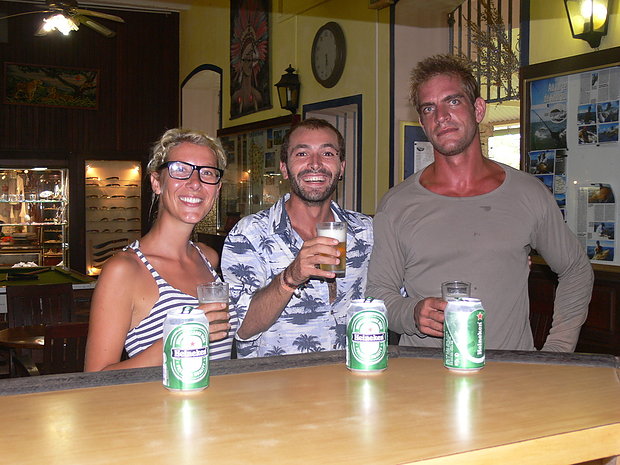 Equatorial weather at sea can be bad enough, as our 10 day, length-wise trip along the intertropical convergence zone showed. However, there are actually a couple of countries in this unenviable location. The one we had landed at, French Guyana, isn’t a real country, it’s a French overseas department, the modern and polite term for a colony. Not that there are any contenders for the crown here: this place is just what I imagine the Amazon (the southern half is actually part of Amazônia) or Pantanal, that most fabled of eco-tourist destinations, to be like: an insect-ridden swamp, with a year-round rainy season. Fantastic, if you’re a plant or a fresh-water fish, that is. We quickly disbanded our l’Armée pour la Libération de la Guyane Française for lack of anything worth fighting for. 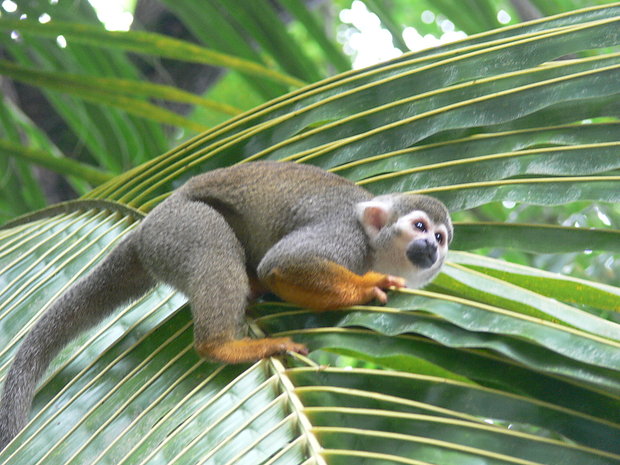 On the plus side, there were French food, lots of pristine flora and fauna, as well as a rare assortment of boat gypsies up the river at Kouru. One of them told me that the French moved an entire village of jungle inhabitants straight into social housing in this not particularly attractive town so as to make space for the European intergalactic project. Yes, this is where the Ariane rockets are launched. Whitey’s on the moon comes to mind. Other than that, there’s no real economy, a bit of illegal gold mining, and plenty of motherland Frenchies down for a légère, conveniently francophonic tropical adventure, without ever leaving la patrie or getting your passport soiled by foreign stamps, all under the watchful eyes of the all-white Gendarmerie of course. 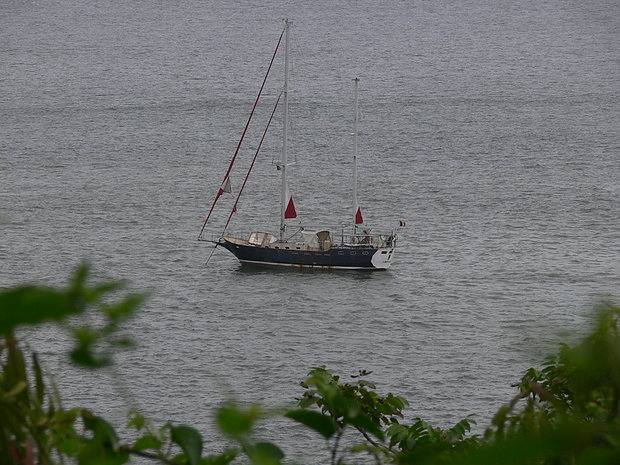 Most of the locals look like Brazilians. In fact, some of them are. The remainder were brought here from Africa to perform a bit of pro bono labour on the sugar and rubber plantations back in the day; nowadays, their descendants appear to be sitting around on enormous social housing estates, enjoying the supposedly highest quality of life in South America. I hear the colonial overlords had to make some concessions following a case of let’s burn down the local authorities office rioting last year. I also met B here again, an acquaintance from Fuerteventura, whose wife and child had left the boat to return to dirt-based living. He wasn’t looking too clever, in fact I didn’t recognise him until his approaching me. His manic eyes suggested crack, the drug of choice around here I am told. El cóctel perfecto, as il professore quite aptly put it. 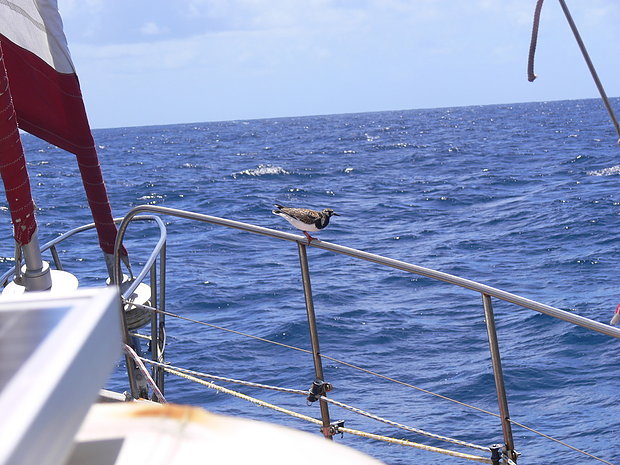 As you can see, this place didn’t exactly win our hearts and minds. Leandro went back down to Brazil, Leentje joined another boat to visit neighbouring Suriname, formerly Dutch version of FG, and I left for a quick 600 nm run to Tobago with Fede. Soon enough, the water returned to its glorious salty nivea blue, and the endless squalls ceased as we made some northing. The trip wasn’t particularly eventful, bar for a mega-pod (dear urbanites: this is not an appletosh product) of tiny dolphins and a visit by worse-for-wear Polly the land bird. No idea what the poor bugger was doing hundreds of kilometres off the Venezuelan coast in the first place. He probably felt just the same about us. 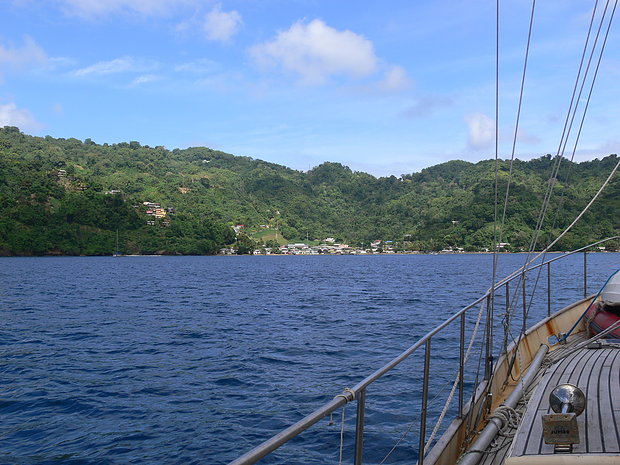 Sleep deprivation can be a bit of a psychedelic experience. On day 5, with Tobago already in sight, I caught myself idly wondering whether flying fish come in flocks or shoals. Or perhaps swarms? It’s like the age-old question of whether a fox is closer to a cat or a dog. Genetically and.. well.. spiritually? You get the idea anyway. A few hours later, we dropped anchor at the wonderfully named Pirate Bay at the easternmost tip of Tobago. We will spend a few weeks exploring the island’s many bays in celebration of this year’s tour (4,500 nautical miles), which had us drawing a giant V into the Atlantic, due to a little detour for the Brazilian Carnival. I will then go on the hard to prepare boaty for the next episode. 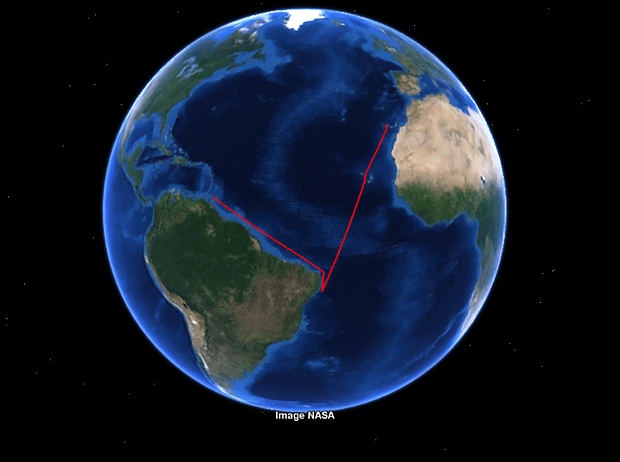