Home/Uncategorized/Hibernating in Oysterville
Previous Next

By skipper|2018-03-13T02:31:22+00:00December 1st, 2010|Categories: Uncategorized|0 Comments
“Ich glaube, jeder Mensch lebt sein eigenes Leben und stirbt seinen eigenen Tod, das glaub’ ich.”  –  Jens Peter Jacobsen
I was once again rewarded by an oddly satisfying sense of achievement for having made it to Cherbourg. I guess all that responsibility-bearing stress on what is after all a fairly insane mission culminates in this sense of “it may have been absurd, but at least we survived to tell the tale”.

Perhaps a bit like the people who partook in and survived that other famous amphibious invasion.. Ok, ok, we weren’t greeted by Nazi armies, but do note the Allies did their landing in mid-summer!

Having arrived in the morning, we slept all day Friday, went out for a few lagers at night, and decided to set off for Guernsey at 0300 Sunday, aiming for Brest or Saint-Malo as an end to my tour with Gebard.

It was still internationally freezing, and I had heard that England was enjoying it’s annual stint of full-blown snow chaos. My slight hint of schadenfreude was immediately rewarded when I woke up on Saturday with a sense of something being deeply wrong.

The freezing temperatures and a quick glance out of the captain’s cabin portholes confirmed that it had indeed been snowing quite a bit. 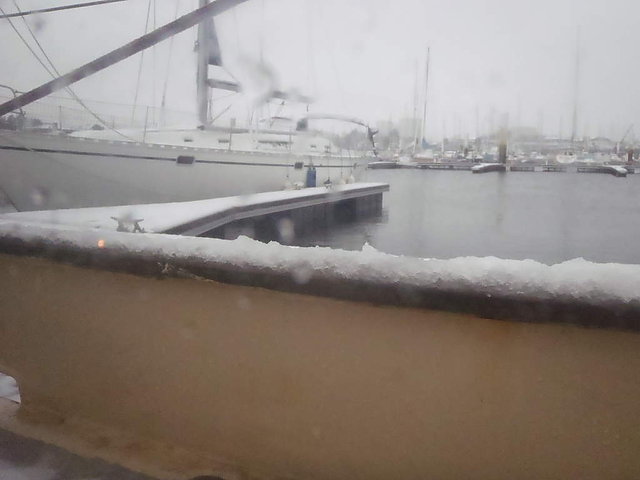 Shock horror – snow on deck is NOT my idea of fun.. It brings up snowsport feelings really. I could just see myself sitting around in thawing sludge for hours on end. 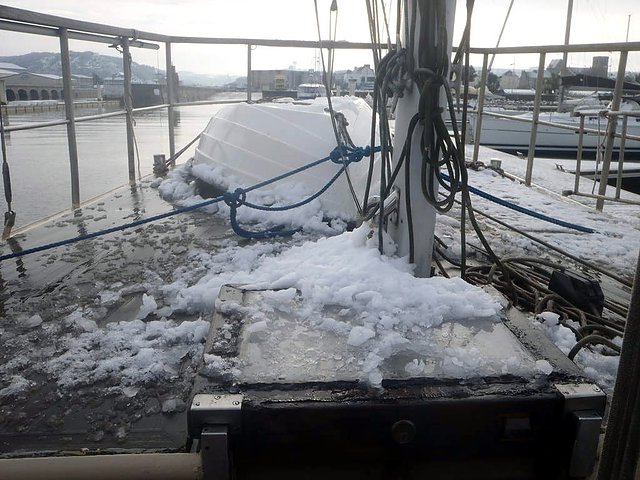 We spent Saturday walking around talking about doing pre-departure preparations before somehow settling back into the same bar as the night before. We then mutually agreed that any further sailing under these conditions would not be a good idea at all. 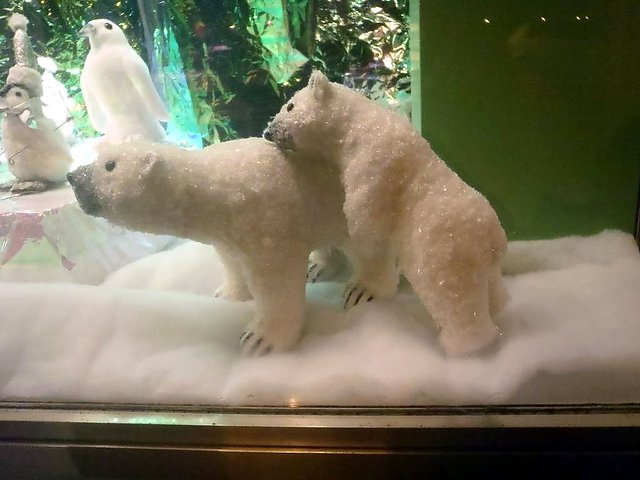 I am now holed up at Cherbourg for the next few months, doing some work on my bits and pieces and hopefully polishing up my pathetic French a bit. There’s a bit of a snowstorm raging outside as I’m writing this.

Not all is bad, wine and cheese are much more affordable than in Brighton. In difference to English cheese, they are not all some variation of cheddar either. The local fish shop sells No3 Oysters at EUR 9.50 for two dozen. I have also found a gym, located a bar with good music, and gotten the Internet going. Simple things hey 🙂

I will be assembling a crew for departure towards Spain in spring – I will send an email around to interested parties. Do keep an eye on the crewing section also.