Third mall from the sun

Home/Uncategorized/Third mall from the sun
Previous Next

Third mall from the sun

I spent two long weeks on the guest pontoon at Brighton marina, which is famously known to be a bit of an overpriced dump. Around it, there are “a large Asda supermarket and two groups of boutique shops, restaurants and bars, plus a hotel, a bowling alley, a health club, a casino, and a multiplex cinema with a multi-storey car-park built over and around it”, plus “several gated communities consisting of townhouses and apartments” (thanks wikipedia!). The long and short of it being, I was suddenly living in the middle of some type of mall environment, a constant reminder of the late capitalist quagmire Bill Hicks referred to as the “Third Mall from the Sun”.

In spite of the lack of organic community, I set out using my tried and tested participative anthropology method, joined the local “david lloyd” gym on a trial, ate asda chickens every day, and sampled all the real ales that were on offer at the local wetherspoon pub in the scope of a CAMRA-sanctioned real ale festival. They actually gave me a t-shirt for my troubles. I was the only true local in my local; most liveaboards were apparently huddled up around the Eberspacher diesel heater I can’t afford. 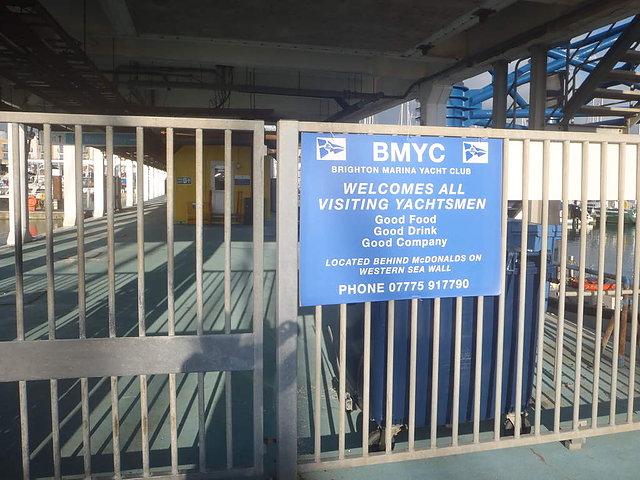 I only went to town on the odd occasion, and depressingly, I had become a stranger in my very own former stomping ground. Luckily I some friends from elsewhere in the country came to lend me their company (thanks Danielle H, Becky C, MJ, James G and Clive!).

Two severe gales, a rebuild of my sprayhood and various miscellaneous repairs later, I was ready to move on. Rescue came forth in the form of Gebard, who flew in from Germany to give me a hand – he also took most of the photos on here. Thanks Gebard! On the night before his arrival however, temperatures crashed by 10° from an autumnlike 12° to their lowest level at this time of year ever. It started snowing in the north of the UK that very night, and when I nearly slipped due to ice on the dock that morning, I knew we were in for a treat.

Coming out of the shower that day, I overheard someone shouting “you saved my life mate”; I then almost choked on my sigh of outrage at this hyperbolic phrase when an entirely wet and very cold looking man entered the toilets. Incredulously, I stared and asked stupidly “did you ACTUALLY fall in?”. Apparently he did, and now I know why marina staff wear life-vests on the docks. 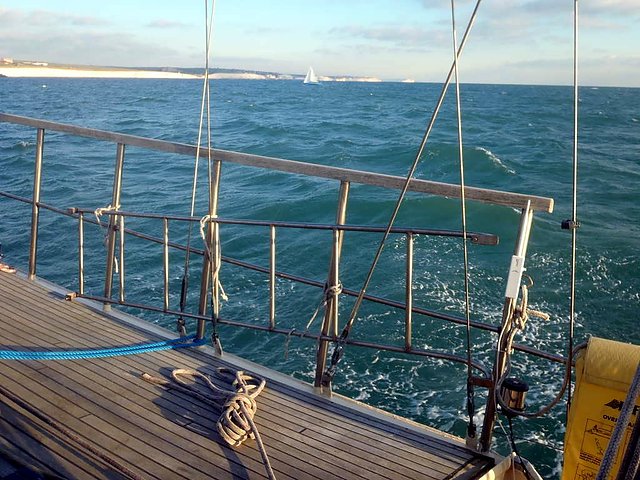 Since conditions were quite good (NE 5-6, no gale warnings, not snowing – yet, tidal arrows hopefully pointed the correct way for a change) we left Brighton at 1430, as soon as my co-sailor arrived. Since it got dark soon after that, there are no photos, but rest assured it was a long and harsh night. We spent hours once again meandering around the traffic separation scheme, doing good speeds under sails. 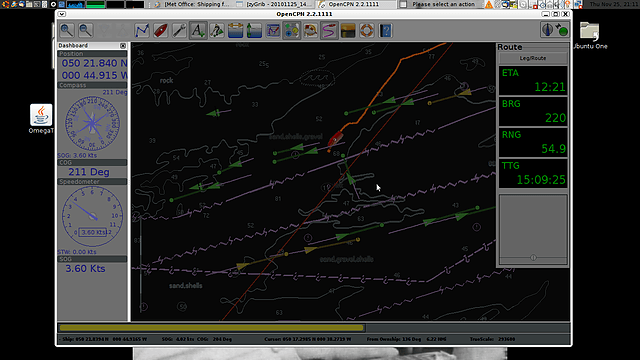 After we had negotiated the traffic, I settled into the first night shift. Since it was overcast, it was a cold, moonless, pitch black night, but when the moon did come out occasionally, the silvery reflections on the water around monster actually gave the whole ordeal something of a poetic dimension.

Sitting around in the cockpit on my own, there was plenty of space for melancholic contemplation. A faint memory popped up from the pubescent years. Yes, I had been to Normandy before, on a school exchange many moons ago. We visited some island off the coast and I found myself sitting there all alone with a local girl, someone’s exchange partner. I wish I could say I did anything other than babble nervously until she initiated what would be what the Angloamericans call a French kiss – my first, in France, with a French girl, whose name has been long forgotten. 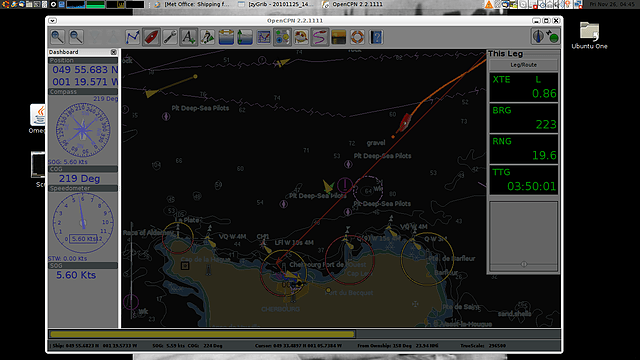 In spite of not being on top form, Gebard did a heroic shift from 1230 to 0430, waking me up with the magical words “land sighted”. I sent him off to bed and spent the remaining leg shivering and humming in turns.

I set the Frenchie guest flag at sunrise, marvelling at this pathetic bit of evidence that I had moved on, survived the cold, and, best of all, that we were nearly there. 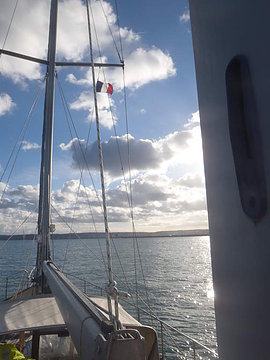 The wind died down right in front of the outer Cherbourg breakwater, so there was no motoring apart from the docking maneuvres – great!