Land of a thousand toothless smiles

Home/Uncategorized/Land of a thousand toothless smiles
Previous Next

Land of a thousand toothless smiles

After arrival in Dover, I started troubleshooting the engine. It turns out the water separator filter was totally stuffed with algae from the tank. I’m inclined to blame the Belgian uniforms again – having had the red diesel pumped out there, I only took a 100 litres of expensive white diesel in, as I was planning to once again fill my tank with red diesel in the UK.

Sounds like a big ironic joke, only it turned out to be one with a nasty side effect: What little fuel there was had been sloshing around in the near-empty tank, and together with the full steam ahead motoring around the traffic separation scheme, I had sucked most of the dirt out of my tank and into my diesel filter. So I started my search around town for alternator belts (can never have enough of those) and “Baldwin” diesel filters; sadly neither was readily available in the chandlery or car parts shops.

I have to say Dover is much prettier coming from the sea; when driving down to the ferry, you just see some ugly dual lane infrastructure going down to the concrete ferry port. Approaching from below, you get to see the white cliffs, the castle and a charming looking town (appearances can deceive observer at safe distance as it turns out).

Walking around this 30 thousand inhabitant village I was quite shocked by the amount of toothless faces, even the kids with kids (teenage mums) seemed to be younger and chubbier than anywhere else I’d seen in my long years of inhabiting the island. I decided that this was also due to sailing across from the continent – the normal transitional scene of an airport or eurostar train station to prepare one for the shock was totally absent.

The next day my co-sailor Ernst informed me that his pain levels were just too high to go on (bad hip). This was rather bad news of course, as I can’t really dock monster on my own yet, and I don’t fancy single-handing her anyway really. So I started some serious online research for diesel filters and crew, and luckily I was successful on both counts. I also got some data on Dover, apparently its got some of the highest child poverty rates in the UK (and its not just the children!).

The first potential crew member I found on the ybw forums sadly had to cancel only hours later due to a mishap (broken ankle), so the journey was off again. Having by then spent a week in “charmin” Dover, I was actually quite keen to move on to my old stomping ground of Brighton. As in really really keen. Luckily a replacement quickly came forth in the form of Colin – thanks Colin! 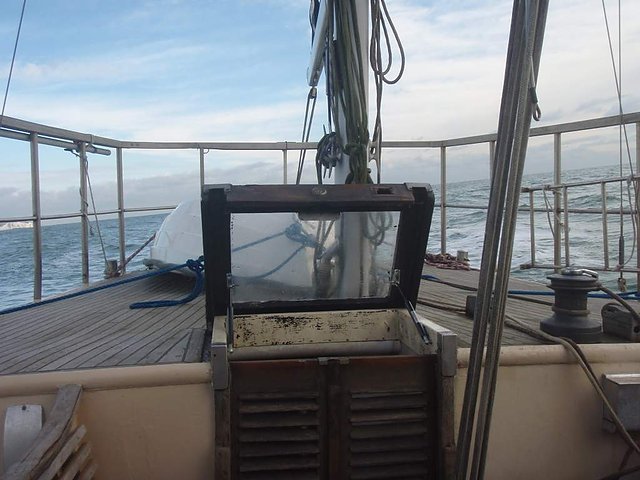 I spent the Friday getting the boat from liveaboard mode into sailing mode, and decided to go out for some traditional Friday night ales regardless of market conditions – I was actually more scared than partying around Rio and wasn’t sure if I was going to survive. But survive I did, and our envisaged 0800 departure was once again on.

Turns out we got up needlessly early as the petrol station attendant was out ferrying some anglers around. I didn’t mind hanging around as I expected us to reach Brighton at night anyhow. Got 200 litres of red diesel and had a good giggle at a neighbouring yachtie, who, having insisted complaining to the petrol station guy about his absence, got referred to as a “snob”. He was a bit of a textbook snob actually.

We made it out to sea eventually, and were greeted by some nasty old swell that didn’t combine all too well with the traditional Saturday hangover. So we started motoring into a knot or possibly more of oncoming current – the forecast 4 bf had not materialised yet again. I don’t want to be at sea when they err by 4 bf into the wrong direction for a change..

My co-sailor Colin turned out to be excellent company. He put on a brave face when we were bopping around in the swell, always kept an alert lookout for lobster pots and landmarks, and did the first watch, allowing me to catch up on my badly needed beauty sleep (and sober up a bit). 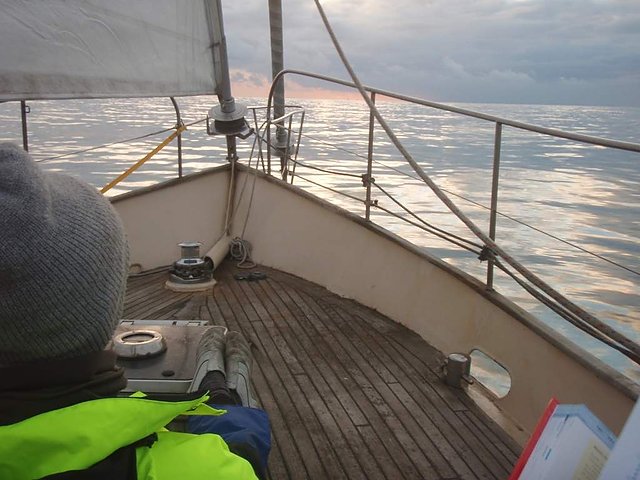 I spent a fair amount of the journey at the bow to escape the horrible diesel noise, dreaming of endless trade winds and heat and bikinis and barefoot sailing.. I just hate motoring, I really do. We got pulled over by uniforms at Dungeness again (allegedly we were in the military training zone, but we weren’t really). At least they weren’t looking for Euros so I didn’t mind them too much. Had a giggle at the implausible location of the power station built on sand (shingle actually).

The engine decided to pack up again at some stage, so following a brief adrenaline rush down I went to change the pre-filter again. I wonder how many GBP 10 filters it takes to clean out a 600 litre tank.. 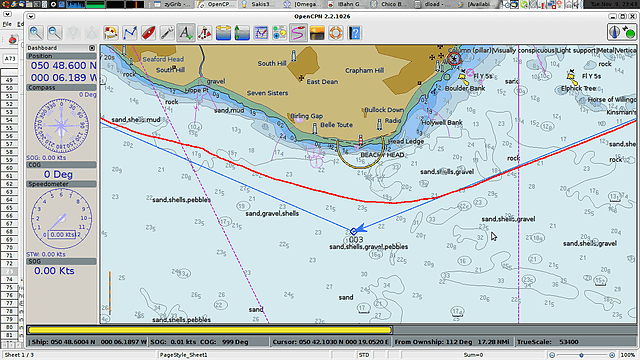 We finally made it to Beachy Head at night, which I later heard referred to as the Cape Horn of Brighton; its not just one of the most popular and scenic suicide spots in Britain, and separates the Coast Guard area Dover from the Solent, it also hosts the strongest currents of the entire area. My co-sailor Colin had mentioned something about spring tides, but we had inadvertently omitted the chartlet for beachy head during our careful (ehem) reading of the Reeds.

The long and short of it being, we spent the best part of 2 hours motoring full pelt into 2.5+ knots of current. I was constantly worried about my filter situation of course. Once past Beachy Head the currents lessened and eventually seemed to turn favourable, and we actually ran into some wind strong enough to give us 6-7 kn under sails along the coast towards Brighton. It all turned out nicely again!

When we finally entered Brighton in the dark around 2400, the gearbox decided to pack up, so I had to perform the docking manoeuvre with the two options of full speed ahead and full speed reverse.. Luckily I could still force the engine into the gears, otherwise it would have been yet another tug job, and Marcus the harbour master was there to give us a hand. The docking manoeuvre was followed by the mandatory docking ales in Brighton city centre. 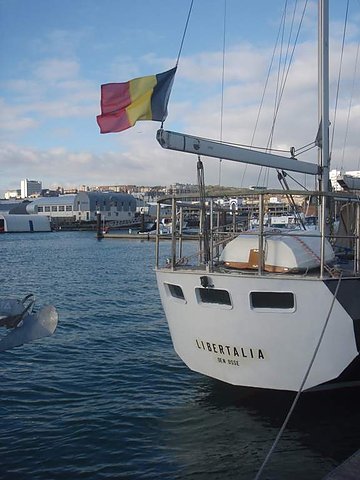 I will be in Brighton for a while attending to my various problems and preparing for the journey to Brittany. Its good to be back home.

[Photos courtesy of my co-sailor Colin – thanks!]